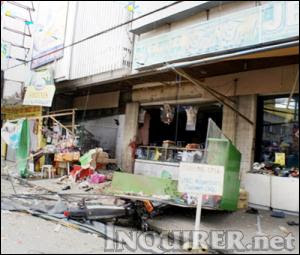 ILIGAN CITY, Philippines -- (UPDATE 6) Explosions rocked two shopping centers here Thursday afternoon and two women were seen on the malls’ videos as having planted the bombs that killed a number of people and injured several others, authorities said.
Military and police said the two people were killed and 47 injured in the blasts at the Unicity shopping center at 1:35 p.m. and at the nearby Jerry’s Shoppers Plaza 10 minutes after. Both stores are on Aguinaldo Street.
The bombs, improvised explosive devices, exploded at the baggage counters at the entrance of the establishments, police said.
Superintendent Dimacuta Sanggacala, spokesman of the Lanao del Norte police, corrected the earlier report he relayed to INQUIRER.net that six people had been killed, saying that some of those whom they thought were dead were seriously hurt.
Sanggacala also the wounded were being treated at the Sanitarium City Hospital and Dr. Uy City Hospital.
Lieutenant Esteffani Cacho, Western Mindanao spokesperson, said two people were wounded and an L-300 van was damaged in the explosion at Unicity while two were killed and two others hurt in the second blast at Jerry’s Shoppers Plaza.
She added that the Explosive Ordnance Disposal team and the K9 unit of the 403rd Brigade had been deployed to the blast sites.
An Associated Press report quoted Lieutenant Colonel Agane Adriatico, a military spokesman, as saying Muslim rebels were to blame for the attacks.
In an interview 403rd Infantry Brigade chief Colonel Nicanor Dolojan said initial findings indicated the improvised explosive devices (IEDs) were crafted out of mortar rounds, which he described as the “signature” of the Moro Islamic Liberation Front (MILF).Dolojan said the motive of the attack was to “sow terror” in the city and possibly divert the military’s focus from offensive operations against MILF units the military has been targeting for attacking civilian communities in central Mindanao in August.“We are still trying to evaluate [and] we are still trying to assess [the] situation…what is really their intention. But our [offensive] operation [will] still continue,” Dolojan said.
Sanggacala said footage obtained from the closed circuit television cameras (CCTV) of both establishments showed the bombs were planted at the baggage counters by women whose faces were covered with veils.
Sanggacala said although they have not identified the perpetrators, these were “acts of terrorist groups.”
He said scene of the crime operatives (SOCO) were searching the area for more victims.
Sporadic clashes between government troops and the Moro Islamic Liberation Front, an 11,000-strong rebel group fighting for self-rule in the predominantly Roman Catholic nation's south, erupted in August after the country's top court scrapped a preliminary peace deal.
Posted by Felfrey at 5:49 AM

Hi my name is Jim,,i have a real close friend that works to close to the bombing sights,,i`m terrified for him and for all that live in the city. i try to keep up on all the news that comes from there and when i read this i just started to cry for all involved. My heart and payers go out for all the injured and all the lost life of this senseless attack. To Mame or kill someone to prove a point or get attention for a cause is not looked upon with favor in our makers eyes.People please rethink your actions.

Thanks Jim for the very wondeful comments..you know I live near to this area..Around 35 minutes from our town,I can reach Iligan City.I was also shocked for what was happen,but I know the perpetrators of this crime has no excuse to God's Law..hope they will realized that thet are not doing the right things in this world..My prayers and sympathy also to the victim of this criminal act..God Bless You Jim..