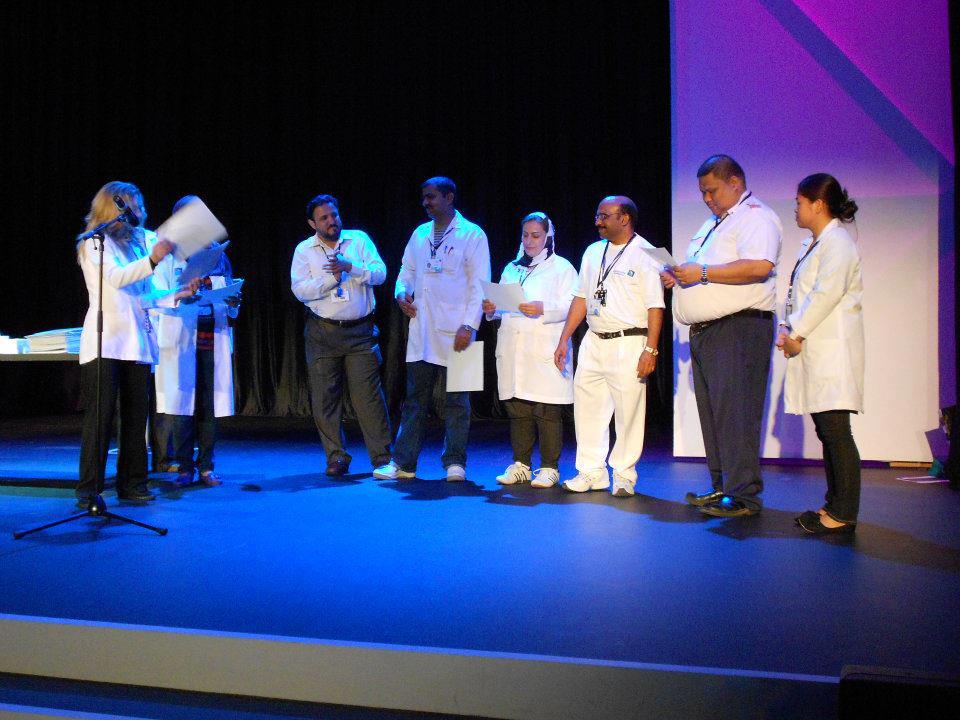 My Birthday..A Simple party with my Colleague in my Company..

It's my Birthday here in Yanbu,Saudi.It is my first time to celebrate it here,with my  co-staff in our company.Things were so fast,yet it is an unforgettable moment as I celebrate my 40th Birthday here in KSA,Celebrations were not as same in the Phillippines,but somehow makes me Happy,as I turn another year of my fruitful and blessedful life here in Saudi Arabia.Pictures shown 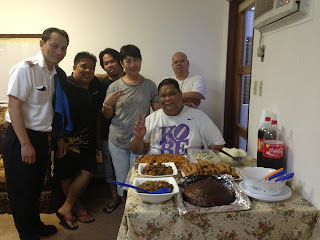 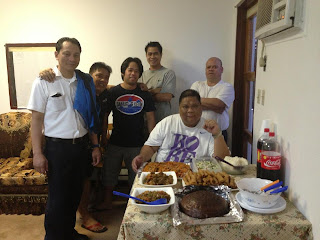 with my Colleague in my Clinic.Thank You Guys.God Bless Us all..
Posted by Felfrey at 1:11 PM No comments:

LOS ANGELES, Nov.1 - The Los Angeles Lakers had very little time to lick their wounds after stunningly losing their regular-season opener to the Dallas Mavericks but, almost to a man, they said that time was their most precious commodity.
Less than 24 hours after being humbled by the Mavericks 99-91 on their home court in downtown Los Angeles, the Lakers were set to face the Trail Blazers in Portland on Wednesday.
"It's a process," guard Kobe Bryant said of fine-tuning a potentially potent Lakers starting five boosted by the offseason acquisitions of six-time All-Star Dwight Howard and twice Most Valuable Player Steve Nash.
"We just gotta continue to chip away, continue to play at it. We just continue working on things, continue to get better and continue to plan to win. Just try to get better every day."
Lakers fans had arrived at the Staples Center for Tuesday's game in exuberant mood, eager to see how Howard and Nash would dovetail with fellow All-Stars Bryant and Pau Gasol, plus Metta World Peace.
However, the sellout crowd was stunned into silence by the end of the fourth quarter as the Lakers, who had made a strong start, misfired after half-time to be outplayed by an undermanned Mavericks lineup.
"It's not the way we wanted it to go," Spaniard Gasol said after scoring a game-high 23 points on erratic eight-of-19 shooting.
"We know it's not going to happen for us right away, but we've just got to continue to stick with it and understand we have to be a little more solid defensively.
"It's going to take a little bit of time, and that's okay. We just have to stay with it, put in a conscious effort every game, every day, every play, to get better."
Posted by Felfrey at 1:40 PM No comments:

The official name of the celebration in the Roman Rite liturgy of the Roman Catholic Church is "The Commemoration of All the Faithful Departed".[1] Another popular name in English is Feast of All Souls. In some other languages the celebration, not necessarily on the same date, is known as Day of the Dead.
The Western celebration of All Souls' Day is on 2 November and follows All Saints' Day. In the ordinary form of the Roman Rite, if 2 November falls on a Sunday, the Mass is of All Souls, but the Liturgy of the Hours is that of the Sunday, though Lauds and Vespers for the Dead in which the people participate may be said. In the extraordinary form of the Roman Rite and in the Anglican Communion, All Souls Day is instead transferred, whenever 2 November falls on a Sunday, to the next day, 3 November.
The Eastern Orthodox Church dedicates several days throughout the year to the dead, mostly on Saturdays, because of Jesus' resting in the Holy Sepulchre on that day. In the Methodist Church, saints refer to all Christians and therefore, on All Saint's Day, the Church Universal, as well as the deceased members of a local congregation are honoured and remembered.[2][3]

The feast of All Saints achieved great prominence in the ninth century, in the reign of the Byzantine Emperor, Leo VI "the Wise" (886–911). His wife, Empress Theophano—commemorated on 16 December—lived a devout life. After her death in 893,[4] her husband built a church, intending to dedicate it to her. When he was forbidden to do so, he decided to dedicate it to "All Saints", so that if his wife were in fact one of the righteous, she would also be honored whenever the feast was celebrated.[5] According to tradition, it was Leo who expanded the feast from a commemoration of All Martyrs to a general commemoration of All Saints, whether martyrs or not.
Posted by Felfrey at 1:22 PM No comments: 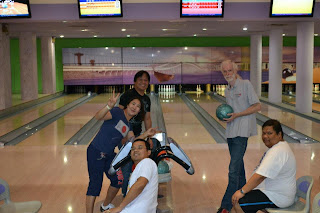 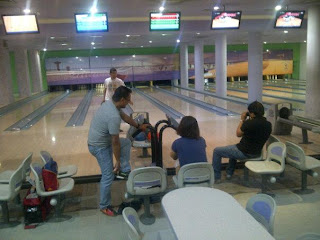 Lately..this past few weeks,I  have been very busy on myself..I have been indulge on one of the favorite pastime for the Pinoy expats in Saudi..Bowling..Although I am not playing well in this sport,but the  most important thing I enjoy was the company of my good friends here in AL-Khobar KSA.They were encouraging me to score more,to spare more and to strike at it's best.Anyway,I would like to say..thank you for them,I enjoy their company very well,as well as I learn to play Bowling with them.Kudos guys,keep it up.We are One Team!.MHS RAC Team..
Posted by Felfrey at 12:32 PM No comments:

History of the Holy City of Makkah 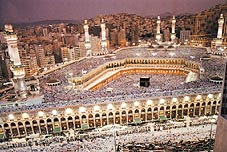 The Grand Mosque
In its long history Makkah has also been known as Bakkah. In ancient times, Makkah was chiefly notable as a staging post on the trade route linking the spice producers of the east with Mesopotamia and the Mediterranean. Makkah lay about midway between Marib, one of the main cities, perhaps the capital, of the kingdom of Sheba (Yemen) and Petra (in Jordan), a city founded by Nabatean Arabs around the 6th century CE and which became a thriving center with commercial interests spreading into Syria. The religious significance of Makkah was established long before Islamic times. It was in Makkah that Allah commanded Ibrahim to leave Haajar and his young son Ishmael; it was in Makkah that Allah brought forth water from the Well of Zamzam which saved the life of Ishmael and his mother and then allowed Makkah to develop as a habitable place; it was in Makkah that Allah instructed Ibrahim to build "the House of God" (the Holy Kaaba). As a result, from earliest times, Makkah became a place of pilgrimage and, although as centuries passed the pure faith of the Prophet Ibrahim became corrupted by idolatry and paganism, Makkah retained its hold on the minds of men as a place where men should worship. When Makkah came under the control of the Quraysh tribe, it was a noted trading center, a place for pilgrimage and the site of festivals chiefly remarkable for intensely fought poetry competitions and the excessive behavior of the idolators. The Prophet Muhammad (peace be upon him) was born in Makkah in 570 CE. When, following revelations, Muhammad opposed the paganism of the Makkan establishment and began to spread the word of Islam, he was forced by the Makkans to leave the city. He went to Madinah which proved more receptive to his understanding of the will of God. In 630 CE, the Prophet Muhammad (peace be upon him) returned to Makkah, taking the city without resistance and purging it of all elements of idolatry. He cleared the Kaaba of the 360 "gods" within, dedicating the Kaaba once more to the pure worship of the one and only God, and establishing Makkah as a place of pilgrimage for all Muslims. From that time, the Holy City of Makkah has been the heart of the Muslim world. It grew in importance as Islam spread and, for the most part, retained a large degree of independence. When the seat of Muslim power moved to Damascus and then later to Iraq under the Abassid Caliphate, Makkah acknowledged each in turn. In 1269 CE, the Mamluk Sultans from Egypt asserted their power over Makkah. And in 1517 CE, the Turks under the Ottomans in Constantinople held sway over the Holy City. Nevertheless, throughout these great shifts in power in the region, the descendants of the Prophet Muhammad (peace be upon him) remained the local rulers of Makkah. When the Ottoman Empire collapsed at the end of the First World War, Abdul Aziz Al Saud (Ibn Saud) came out of central Arabia, the Najd, and, armed with a deep commitment to the pure form of Islam, took control of Makkah, accepting guardianship of the Holy Sites as a prime responsibility of the Kingdom he founded, the modern state of Saudi Arabia.
Posted by Felfrey at 11:06 AM No comments:

Ramadan is the 9th month of the Islamic calendar. The term Ramadan literally means scorching in Arabic. It was established as a Holy Month for Muslims after the Quran was revealed to the Prophet Muhammad in 610 CE on the occasion known as Laylat al-Qadr, frequently translated as "the Night of Power.
Observance of Ramadan is mandated in the Quran, Surah 2, Ayah 185:

“The month of Ramadhan [is that] in which was revealed the Qur'an, guidance for the people and clear proofs of guidance and criterion. So whoever sights [the new moon of] the month, let him fast it; and whoever is ill or on a journey - then an equal number of other days. Allah intends for you ease and does not intend for you hardship and [wants] for you to complete the period and to glorify Allah for that [to] which He has guided you; and perhaps you will be grateful.”In general, the practices of Ramadan are meant to purify oneself from thoughts and deeds which are counter to Islam. By removing material desires, one is able to focus fully on devotion and service to God. Many Muslims go beyond the physical ritual of fasting and attempt to purge themselves of impure thoughts and motivations such as anger, cursing, and greed.
During the month of Ramadan, most Muslims fast from dawn to sunset with no food or water. Before sunrise many Muslims have the Suhur or predawn meal. At sunset families and friends gather for Iftar which is the meal eaten by Muslims to break the fast. Many Muslims begin the meal by eating dates as the Prophet used to do.
This ritual fast known as, Sawm, is one of the five pillars of Islam, and requires that individuals abstain from eating, drinking, smoking and sexual intercourse. 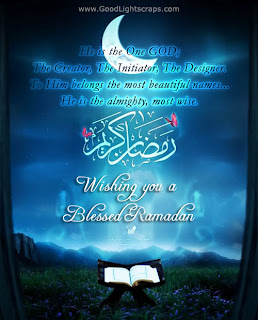 To find the specific times for Ramadan fasting, click over to this helpful tool provided by IslamiCity that allows you to calculate prayer schedules -- including sunup and sundown -- by entering your city or zip code.

Posted by Felfrey at 6:56 AM No comments: